I know that I’ve been absent from this blog for quite some time and I’m not making any promises, but I’m trying to get back into the groove.

Recently, we had to say goodbye to our first cat (together), Hemingway. Forrest’s parents found her as a kitten in their backyard in 2007. We found out a couple years later that she suffered from congenital heart disease. So we took her to the kitty cardiologist, gave her medication daily, and hoped for the best.

In January of this year, Hemingway went into heart failure. Fortunately, the emergency vet is nearby, she responded well to the meds, and came home a few days later.

In June, she threw a blood clot and couldn’t move one of her back legs. Again, she responded well to meds and came home in a couple days.

In September, Hemingway threw a larger clot, which led to more clots, and within a few hours I was stroking her head while a ventilator breathed for her.

We buried her in the backyard. She always loved to sneak outside.

It’s not a time to be sad, but a time to celebrate Hemingway. Four years ago, we were told she may only have a few months!

Hemingway was strong-willed, beautiful, loyal, and fun. She loved rubber bands, climbing things, and sleeping in front of Forrest’s computer. Most importantly, she was wild, unpredictable, and wonderful. 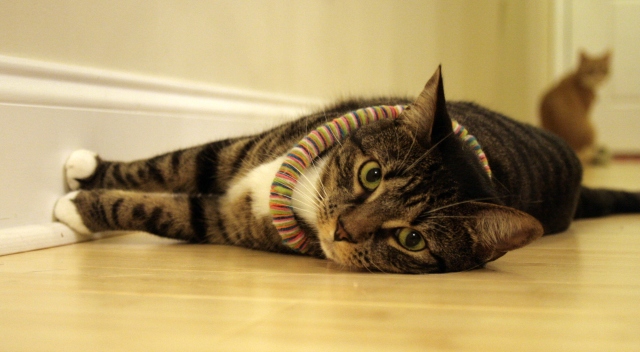