More than seven years ago, while on vacation in Myrtle Beach, I convinced myself (and my parents) that I desperately needed a pet turtle. They look so cute and tiny in those fish tanks in the junky beach stores, don’t they?

Well, I picked one out, named it Mr. T. Turtle, and a new era began.

Honestly, I didn’t expect him to live long. I know that sounds bad, but it’s the truth. I figured I’d give him a better life for a few months before he kicked the bucket.

Well, Mr. Turtle lived in a dorm room with me for most of college. He was super tiny at first, so Valene (best roommate ever) and I would hide his little bowl under a towel or under our beds if someone came in for an inspection. No reptiles in the dorms, you know. 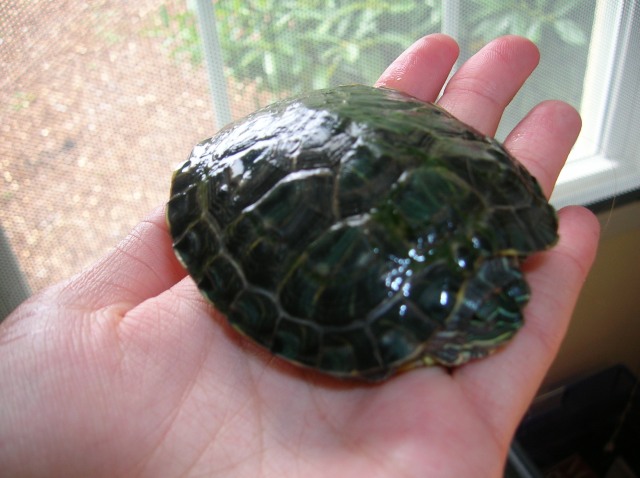 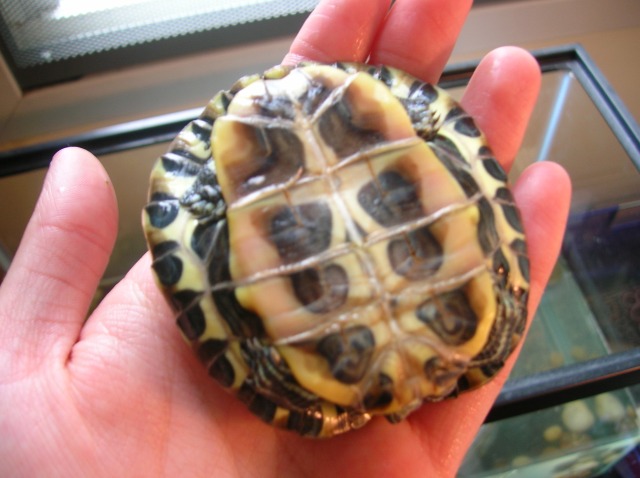 Through the years, the turtle and his tank grew and grew. When Forrest and I got married, we got him a big, fancy reptile tank because he needed more space! Yeah, we’re nerds. Mr. Turtle was happy.

Earlier this year, Mr. T. wasn’t doing very well. He was lethargic and swimming sideways. So we took him to the only exotic animal vet in Columbia where we found out that MISTER Turtle was, in fact, a lady turtle.  Anyway, the Turtle had pneumonia and needed shots and to be outdoors in real sunlight. She recovered well and spent the spring and summer happy as a clam, eh, turtle, whatever.

We planned for the day when we had a backyard big enough to build a little fenced-in pond for the turtle to live in during warm months. She would have loved it.

But last month, she got sick again, so we started taking her out for some real sunshine again, hoping that would do the trick. Sadly, one afternoon while she was out on the deck sunbathing, she passed away. I held her and talked to her for a long time. I know it’s crazy, but she was my first pet to die. Other than fish, because fish just don’t count.

We buried her in the herb garden. I miss that little turtle.